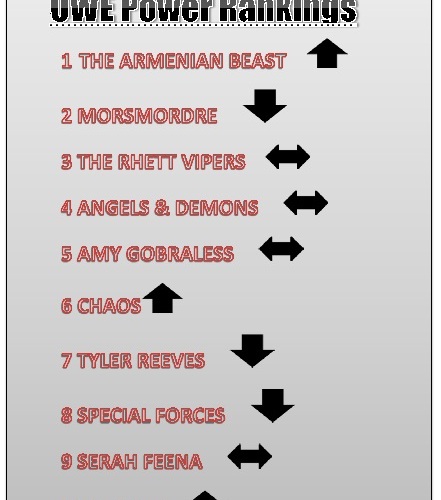 1. The Armenian Beast (2) – Beast won his in-ring return during the main event. Although Beast beat Asylum’s doppleganger, poser or whoever that was, the Armenian Beast remains the dominant UWE Champion. Thus, Beast takes the number one spot.

2. Morsmordre (1) – Asylum technically didn’t lose to the Armenian Beast and consequently falls back a spot due to the loss and inactivity. However, Asylum remains at number two and will go on to face the Champion and Chaos at the PPV.

3. Rhett Vipers (N/A) – Thanks to Ruby, the Rhett Vipers hang in as a formidable tag team. Ruby is the number one contender for the Rising Star Championship. She was almost a World title contender, but she’s not quite there, yet.

4. Angels and Demons (N/A) – The tag team remains in the fourth spot after both members suffered from a loss. They are in detriment of losing their spot on the rankings unless they can pick up a win here soon.

5. Amy Gobraless (N/A) – Amy Gobraless remains in the power rankings and edges out the top five. The UWE Rising Star Champion could very well climb the rankings or fall out of the top five after the pay-per view. She defends her belt against Ruby in a title bout.

6. Chaos (8) – Chaos won his beat the clock match and will now get a World title shot against two other competitors. Lucky for him. Or is it unlucky? Chaos will have to face Asylum and Armenian Beast. Chaos sits at number six.

7. Tyler Reeves (6) – Reeves was unsuccessful against Chaos, so he moves down the rankings by one spot. He takes the seventh slot on the rankings this week.

9. Serah Feena (N/A) – Serah remains in the ninth position due to an inactive week. We like you Serah, but you won’t rise up unless you can get some W’s. Otherwise you will be a victim of circumstance.

10. Craven (N/A) – Ah, a new entrant to the power rankings. Craven didn’t make a big enough splash in the beat the clock matches to earn a title match. But the win was enough to see Craven become a new addition to the weekly power rankings. He sits in the ten spot.